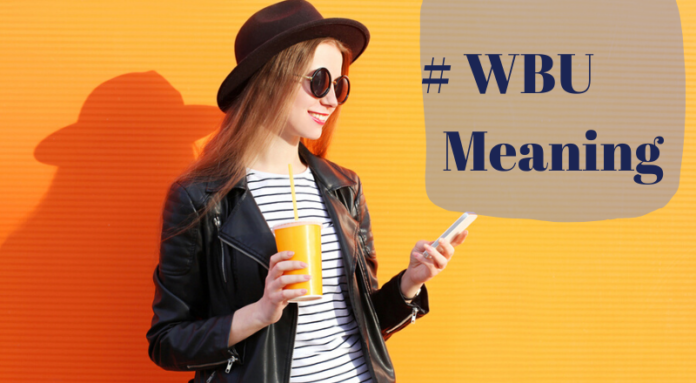 The usage of Social media sites and applications by people is increasing day by day. Every day a new social media site or application is developed and the number of users on such sites increases day by day. WBU is a common internet slang expression, these days you face many strange short terms like LMK, OFC, OTW, WYM, etc on social media networking websites such as Facebook, Twitter, and Snapchat. Most people do not know WBU meaning, so here I will discuss this slang word in detail.

WBU used in various places around the world, in real-life conversation. Sometimes You just receive a message or text with WBU and you don’t know what does it mean? And how to reply to such messages. So If you’re looking to find what What Does WBU means, What does it stand for and why people use such words so, in this article you will find all information about WBU.

Contents show
What Does WBU Stand For?
WBU Meaning
Why We Use WBU?
Can We Use WBU In Formal Texting?
WBU Stands For Else
Some Common Examples
Example-1
Example-2
Example-2
Final Words

What Does WBU Stand For?

WBU stand for “What About You“. Now I hope you will be familiar with this term online chatting with your friends.

“HBU” is another short term that stands for “How about you” which is also used as an alternative to the word “WBU”. Such short terms are getting very popular these days on social networking sites during chatting. There are many reasons to use slang words but the main reasons for using slang words in a conversation, to save time and a quick reply is one of them.

Check Also: What Does SOZ Mean?

Now let’s see what does WBU text means? we already know WBU stands for What About You. WBU normally used to get the opinion of someone, such as if the first person tells the second person “we are going on a trip. What about You? ”. Now the second person replies yes I will go also.

We use this kind of term when we want to know someone’s opinion, feeling and thought. Such terms have may have different meanings in various fields and such terms can only be used in informal conversation.

Why We Use WBU?

There are many reasons for using this slang word, everyone is in a hurry and they want a quick response to their message. Instead of full-term “What about you” people use the short form of the word in texting that is “WBU”. Many people use the word WBU in texting to save time instead of the type the entire word. There are also some networking sites which has a limitation of characters such as Twitter which allow you only 280 characters so in this situation people using slang word to save characters.

Can We Use WBU In Formal Texting?

Formal conversation means when you are messaging or emailing your boss or a person with higher authority than you. You should avoid using slang words in conversation with your boss or someone with authority. So be careful while using this internet slang because it depends upon the frankness level with the next person.

WBU Stands For Else

This Slang has different meanings in different areas. Slang words can confuse if it is used in conversation between two people from a different field because it’s meaning different in various fields. So it is recommended to avoid the use of any slang word in such a situation.

A list of WBU slang meanings in other fields are given below:

To make the WBU meaning more clear, below are some examples that may help you in understanding it:

The first friend uses WBU slang in conversation and asks if his friend would like to meet up for food.

Friend 1: do u really wanna go on a trip with the class fellows?

Here in this example, the second friend uses WBU to clarify whether his friend is going on a trip with their class fellows or not.

If we describe in a single line, WBU simply means WHAT ABOUT YOU? It is a short form and helps us in text messages. I have explained it with the examples as well.