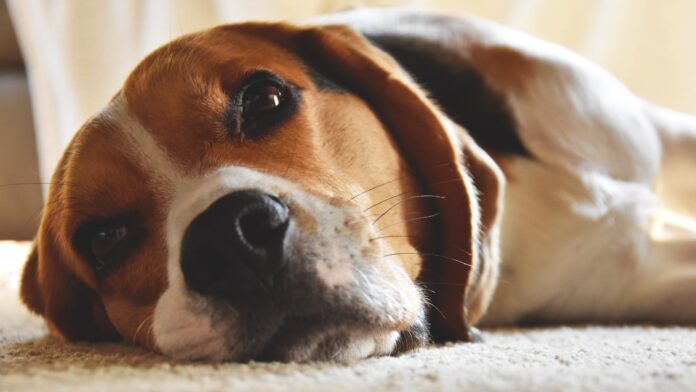 Have you ever seen a dog licking its own paws? This is done not without reason, here are the reasons why dogs often lick their paws

Dog owners must have seen their favorite dog do something continuously. One example is when he often licks his paws. Many think this is a habit that dogs do.

However, there are also those who think that this is not a natural habit for dogs. Many also assume that when a dog frequently licks its paws this is a sign that the dog has problems with its feet.

Well, which one do you believe?

Why Do Dogs Always Lick Their Feet?

Sometimes licking her feet too much becomes an addictive habit that is hard to break . Dogs that lick their paws excessively usually have characteristics such as stains on their paws.

This is what you should actually avoid because this can be a negative habit in dogs.

Dogs that lick their paws usually have a pretty serious problem. There are two possibilities, when he only licks one paw, it indicates that one of his claws is experiencing pain or irritation.

There may be problems such as injuries from broken glass, insect bites, or thorns

But when you see him frequently licking and limping at the same time, that’s what you have to deal with immediately. It’s likely that this is due to deeper problems in the foot, such as sprains, pulled muscles, and some types of inflammation or even fractures. Immediately consult the nearest vet .

Frequent licks are often associated with chronic allergies. But you can trace this from food, furniture chemicals in your home, carpets and many more that you can analyze.

So usually when your dog has just finished playing on the grass, then he starts licking his feet, it could be because he is allergic to grass caused by pesticides.

Well, secondly, if you suspect that your dog has a yeast infection, it’s usually caused by a bad diet. Sometimes you can do the simplest treatment, such as treating hair loss and changing the dog food that you give. Consult a doctor to overcome this disease.

Your Dog Is Bored

There are things that can make you calm, because not all dogs that lick their paws have serious problems. Sometimes dogs also experience boredom, so the activity of licking their testicles is just a fad.

Maybe, he is rarely asked to go out of the house and run around in the field. Often dogs that have habits like this, are usually dogs that just keep quiet at home and in their kennels.

Therefore the way to deal with it is quite simple: take him out of the house regularly.

The right time to invite the dog to move is in the morning or evening. This was chosen because the temperature in the morning and evening is not too high like during the day which can actually make the dog dehydrated.

When a dog doesn’t have a balance of hormones, then they either produce too much cortisol or don’t produce enough thyroid hormone. As a result, this can increase the dog’s susceptibility to skin problems.

The most common skin problems are red spots, baldness and hair loss in dogs. Too often licking these red spots will result in baldness on the infected part.

This is probably the most common thing you suspect when your dog licks his paws a lot.

Fleas and ticks make an itchy feeling which causes the dog to constantly lick and chew something. The condition will get worse if your dog is allergic to fleas.

You have to deal with it immediately with flea medication that you can find at the nearest pet shop. If your pet is also allergic to flea cleaning products, you should immediately consult with your beloved veterinarian.

Those are some of the reasons why dogs often lick their paws or nails continuously. With this information, it is hoped that you can better understand what your pet cannot say.